If you’re connecting your Skype computer to your mixer with analog cables, make sure you’re doing it correctly. Be aware that there is one little issue that can damage or at least compromise the performance of some computers.

Most Internet broadcasters and podcasters are (or should be) using an auxiliary send on the mixer to send a mix-minus feed to Skype. That feed is mono. Most desktop and USB computer sound cards have stereo inputs. Skype really only looks at the left channel for its input, but some cheap, no-name sound cards may actually get the channels reversed internally. Therefore, it’s a good idea to feed the audio from the aux send on the mixer to both the left and right channels of the computer sound card.

In a typical installation, the cable needed will be a ¼” two-conductor (TS) cable plugged into the aux send on the mixer and a ⅛” three-conductor (TRS) cable plugged into the computer sound card on the other end. To get mono audio from the aux send to both stereo channel inputs on the computer sound card, the tip and ring (TR) connections on the ⅛” plug need to be shorted together. If you make your own cable, simply connect both of the left and right hot wires (tips) from the ⅛” plug to the hot wire (tip) of the ¼” plug. With a USB sound card, the inputs are often RCA jacks instead of ⅛” jacks. In that case, the hot wires of each RCA plug (tips) are also connected together at the tip of the ¼” plug. 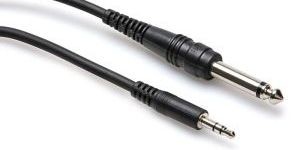 You can “make” this cord by using adapters from Radio Shack, but using adapters should be a last resort to getting or making the right cable. Every time you add a connection, you add a potential point of failure. Anyone who has used adapters on audio cables has probably experienced a flaky connection because of adapters. If you have not had a problem yet, you will.

A good solution is to use the Hosa CMP-105 cable, pictured here. The CMP-105 has a ⅛” TRS plug on one end and a ¼” TS plug on the other. The tip of the ¼” plug is connected to the tip and ring of the ⅛” TRS plug. The ¼” mono plug connects to the mixer’s aux out jack, and the ⅛” plug connects to the computer sound card. Even though Skype is mono and only sees the left channel of the audio input, the CMP-105 causes audio to appear on both the left and right inputs of the computer sound card. If the card is miswired internally, it doesn’t matter since audio appears on both the left and the right channel inputs. If the card is wired correctly, it simply ignores the audio on the right channel. 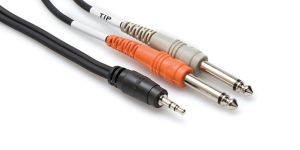 Unlike the input side, it is not a good idea to short the left and right channels on the output of the sound card together. The explanation is very technical (the output impedance of each output is lower than the other channel is able to drive without damage or distortion), and not every sound card suffers from the issue (for example, if the outputs have a series resistor). The CMP-105 used above for the input side should not be used to connect the output of the sound card to the mixer. That cord shorts the two sound card outputs, and that’s a bad idea. 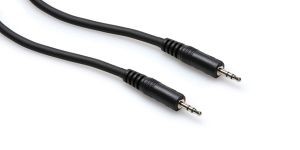 A safe solution is simply to connect the left channel of your sound card to the line input of a mono channel on your mixer. If you want, you can get the same CMP-159 ⅛” stereo to ¼” dual mono cord and connect only the left channel ¼” mono plug to the mixer. That is, you only connect the gray plug to the mixer. Leave the orange plug floating, but don’t let it short against anything. You can “make” a cord using adapters from Radio Shack. Read the warning above about adapters.

If you make your own cords like I do, you can get a ⅛” stereo to ⅛” stereo cable, cut it in half, and solder on a ¼” mono plug connecting only the left channel hot wire to the ¼” tip and the left channel shield to the shield on the ¼” plug. Avoid unshielded ⅛” to ⅛” cables intended for speakers. The shield inside the cable is necessary to prevent noise in your audio. The 15 foot Hosa CMM-115 cable, shown here, will allow you to make two 7-½ foot cables with molded ⅛” TRS connectors on one end and the connector of your choice on the other. 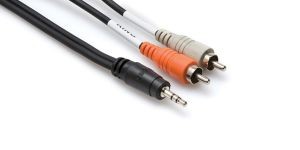 As always, there can be exceptions to the general rules posted here. For example, sometimes when you connect a computer to a mixer, you get a ground loop. That ground loop puts a horrible whining noise into your audio. A good way to eliminate the ground loop and the noise is to add a group loop isolator. If you have to add one, the connections described in this article may not be the right ones. Fortunately, Hosa and many other manufacturers make cables that allow you to connect almost anything to almost anything else. A ⅛” stereo plug to two mono RCA plug cable, like the CMR-206, is necessary for some installations, such as connecting the Tape Output of a mixer to an external recorder.

Be sure you understand the details discussed here so that you get the right cables. When you order cables, get a couple of spares. Note that the Hosa cable numbers given here are for specific lengths. If you need a cable that is longer or shorter, the model number will be slightly different.

If you have questions about anything mentioned in this article, you can reach me through Twitter at@mcphillips. There are more tips and tricks at http://mikephillips.me. Thanks to Hosa for providing the pictures for this article. Hosa cables are available through Amazon.com and many professional audio dealers.