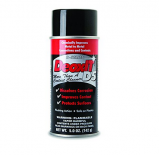 Do you get a lot of “snap, crackle, and pop” with your audio connections? Do you hear disgusting noises when you touch or rotate an audio plug that is connected to your mixer? If so, you probably have oxidized connectors!

Oxygen reacts with metal and causes oxidation, which is casually described as a layer of crud that acts as an insulator and prevents a connector from making good electrical contact with its mating connector. The problem is really annoying with audio connectors because you can hear the discontinuities that the crud creates.

All sorts of techniques have been used over the years to eliminate oxidation, including removal by sand paper and pencil erasers. It’s not a good idea to use abrasives with metal connectors because you’ll remove some of the plating, particularly gold plating. Most people have a can of cheap spray contact cleaner, which probably doesn’t work well or last very long.

Do yourself a favor and order a can of Caig Laboratories’ Deoxit D5 contact conditioner. Amazon has it in stock, it’s eligible for Prime. It’s not cheap, but it lasts a long time.

Deoxit not only removes the oxidization layer from metal connectors, it also conditions the metal to resist or delay oxidation in the future. When you get your can, remove each audio plug from your mixer or computer, one at a time. Give each plug a VERY brief spray, plug it back into the mixer, and “work it” a little. If you hear noise when you rotate the plug or move the connector, don’t spray it again yet. Let it sit for a day or two and then test it again. Deoxit keeps working after the initial application.

Depending on your environment, you should repeat the process every few months or at least once per year. The ⅛” miniplugs that connect to computer sound cards are particularly problematic. There’s not a lot of surface area, and most of them are made really cheaply. You may want to treat them more often.

Resist the temptation to spray Deoxit into the jack on the mixer. The jacks are open on the back, and the spray will go into the inside area of the mixer. While the spray will not hurt metal or plastics, it can cause some problems when too much is sprayed onto active circuits, like RAM and microprocessors.

An effective treatment with Deoxit D5 only requires that you cover the metallic surface. Spraying more does not help. When you spray a connector, release the push button on the can as soon as you press it. A little goes a long way. If you need to apply more, do it a day later.

Back in the seventies, there was a product called Cramolin that was magic. (It may still available in Europe.) If Cramolin did not make a connector work correctly, you could rest assured that the connector was bad. Cramolin used Freon as a propellant, so it’s not legal to sell in the US any more. Craig Laboratories was the distributor of Cramolin. Deoxit is not as good as Cramolin, but it’s the next best thing.

Caig Labs has a lot of Deoxit products. They’re all good, but Deoxit D5 is the only one that most Internet broadcasters and podcasters really need. Take a look at the customer reviews for Deoxit D5 on Amazon, and then get yours on order today. You can thank me later. In fact, once you’ve tried Deoxit, please send me a tweet (@mcphillips) to let me know what you think.